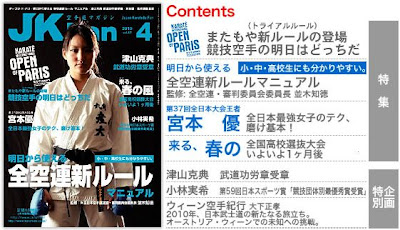 JKFan karate magazine 2010 #4
The fourth article in the monthly Richard Sensei's Corner series is about professional non-Japanese karate instructors in Japan.
Since my main topic is only printed in Japanese in the magazine, the English version may be read here on my blog - just scroll down!
My bilingual interview this month is with Richard Heselton. JKA 4th dan Heselton (32) came to Japan when he was 18, he is a Takushoku karate club alumni (which he captained) and he now teaches karate classes at Taishijuku's International School Karate Club in Tokyo.
To order this month's magazine go to JKFan's order page!
こちらからも入手可能です。
Japanese
English
第4回今月のリチャード先生'sコーナーは、日本にいる外国人のプロ空手指導者です。メインになる話は日本語でのみ印刷されるので、英語版はこの僕のブログで読んでください。
今月のバイリンガル・インタビューはリチャード・へセルトンです。社団法人 日本空手協会４段のリチャード・へセルトン氏（32歳）は18歳のときに来日、拓殖大学の卒業生です（空手道部では主将を務めました）。現在は東京にある大志塾のインターナショナルスクール空手道部で指導しています。

In Canada ice hockey is the national sport, it is extremely popular and the coaches are almost always Canadian. Yet I’m happy to report I have heard of a few talented Japanese coaches. These are people who tried hard to learn the sport very well over many years, they perfected their English, plus they assimilated into the culture by making friends and becoming part of the community. In comparison, this is exactly same way non-Japanese Karate-ka have become Karate instructors in Japan.

For NJ, we first came to here because of our curiosity of Japan and our desire to deeply improve our Karate knowledge. Then the friends we made in dojo became our best friends, which is always a motivating factor for NJ to stay in Japan because we feel through our efforts we have become accepted.

The transition from student to instructor is normally due to the good relationships NJ have developed with senior Japanese instructors. For example, Brent Regan, who teaches at the JKGA Gojukai hombu, said that luck and timing were two main factors when his instructor, Saiko Shihan Goshi Yamaguchi, asked him to start teaching there several years ago.

This is in part due to how NJ instructors have tried hard to make ourselves part Japanese society, without losing our own personal identity. When Dan Burgess use to teach English to teenagers in Gunma, he started to also teach them Karate when one boy’s father, an inactive Karate instructor with an unused dojo, asked him to. According to Dan, ‘’the father looked at me as someone who had something to offer.’’ This is common for NJ instructors, for people to look at us as individuals who have many important things to contribute.

For former Seto City, Aichi-ken dojo owner Patricia Taniguchi, ‘’I think a lot of students joined with the idea of being able to learn from an English speaking Sensei.’’ Other NJ instructors have also said the same thing, this interest to combine Karate with English.

Personally I have found students seem to pick-up English conversation and comprehension quickly when it is used with the physical actions of Karate. Actually the same is true to how NJ learn Japanese through the practice of Karate as well.

This is because ‘language is culture.’ Learning a language is not a cold scientific topic to memorize, but something to experience in a living, breathing way. As instructors we are trying to share something with other humans beings, through modeling, speaking, and of course, smiling.

Being a professional instructor is similar to being a craftsman, consistently refining one’s skills of explaining and analyzing over many years. For example, in conjunction with formal coaching training in Canada, Marc Waterfield, coach of Butoku Junior & Senior High School, is completing a Masters Degree in Teaching English as a Second Language so he can better understand how to teach Japanese students.

When speaking with other NJ instructors, we all agree that without a doubt, setting a good example is the most important thing about not only being a NJ instructor, but for all instructors. As Marc said, ‘’our actions speak louder than words.’’ Truly a way of life everyone can live by.