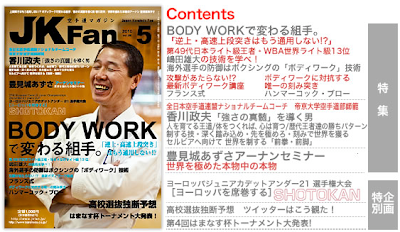 JKFan karate magazine 2010 #5
The fifth article in the monthly Richard Sensei's Corner series is about being a Japanese overseas home stay Karateka. Since my main topic is only printed in Japanese in the magazine, the English version may be read here on my blog -just scroll down!
My bilingual interview this month is with Mark Waterfield is the Coach of Buntoku Gakuen Junior & Senior High School Coach in Kumamoto City. Originally from Canada. Mark has extensive experience competing at the Canadian National Championships and numerous international events.
第5回今月のリチャード先生'sコーナーは、海外ホームステイする日本人空手家になるです。メインになる話は日本語でのみ印刷されるので、英語版はこの僕のブログで読んでください

One of the great advantages about Karate relates to the many Japanese style associations having numerous overseas branches. For the Japanese Karate-ka, these connections provide excellent opportunities to see the world, make non-Japanese friends, learn foreign languages plus experience Karate in different countries.

For example, in my former Canadian dojo, if I received a request from a Japanese Karate-ka who wanted to come to Vancouver, I would find out how long they wanted to come for and what they wanted to do. If they are coming on a 90 day tourist visa, they probably wanted to travel around. If they were coming on a student visa for 6-months or 12-months, normally they were coming to learn English at one of the many English language schools. Many Japanese also received a 12-month ‘working holiday visa’ which allowed them to work as well.

With this information, I would offer the opportunity to be a host family to my club’s members. Normally several people would be interested because many Canadians enjoy accepting home stay guests.

Like many countries, it is important as a home stay guest to realize is there is no ‘one Canadian culture’. Canada is made up of numerous cultures because it is a country of immigrants and First Nations, so a home stay family could be Italian-Canadian, German-Canadian, or in Vancouver where 50% of the population is Asian, it could be Chinese-Canadian. This is a bonus for Japanese home stay Karate-ka because they can experience not just typical Canadian culture, which includes eating maple syrup on pancakes and watching ice hockey on TV every night, but also seeing how immigrants have integrated into Canadian society while also keeping their own identity. It's is successful immigration policies keep the Canadian population from shrinking.

One of the great bonuses for Japanese Karate-ka visiting Canada is that not only can they compete in the local tournaments, but they may try out for provincial teams and thereby compete at the Canadian National Championships! While their results at the Nationals will not qualify them for the Canadian Team, the reason for this unique policy is for Canadian athletes to get more tournament experience with foreigners.

Home stay families and the overseas branch members normally become lifelong friends with the Japanese they host. Therefore being a home stay guest truly creates a precious international dimension to one’s life, which of course helps bring the world closer together.