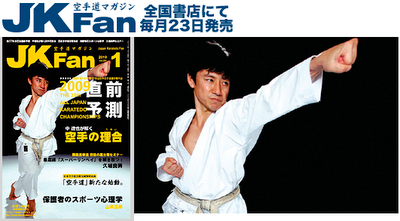 My little (2 pages!) JKFan monthly column 'Richard Sensei's Corner' is now on sale in the latest issue January 2010 vol.84. Since my main topic is only printed in Japanese in the magazine, the English version may be read here on my blog.

In addition to the main topic article, there is also interview topic in both Japanese and English so people can enjoy reading them both in JKFan. This month I sort of interview myself. The third part is a fun English lesson which will begin from next month. English readers must keep in mind this whole column was originally written for a Japanese audience.

So without further adieu, here's the English original of why non-Japanese learn Karate, except this is the 'director's cut' long version compared to what's printed the magazine since there are always space restrictions with publications.

According to the World Karate Federation (WKF), there are over 50 million people practicing karate around the globe. That means there are more people outside of Japan enjoying karate than inside Japan. The questions that Japanese people often ask me are why are so many non-Japanese (NJ) interested in Karate?

A simple answer is that NJ mainly learn Karate for fitness, for self-defense and for building self-confidence. These are probably the three most important reasons foreigners learn Karate, but they are not the only reasons.

The common ways many Japanese think about Karate are often shared by NJ I believe. Most of the important philosophical Budo ideals related to Karate have decades ago been translated into many languages so ideas about tradition, honor, humility and respect are popular reasons NJ are attracted to Karate. The harmony of the mind, body and spirit is an appealing idea to people in different cultures because such an ideal makes Karate a serious pursuit throughout one's life.

Even the idea that a student is accepted by an instructor, that this is a relationship about that student trying to properly learn and carry on the teachings of their instructor, is commonly accepted overseas. If an instructor takes a personal interest in a beginner, that beginner will probably continue with Karate for a long time, just like in Japan.

Some of my Japanese friends started Karate here in Japan for the same reasons myself and my Canadian friends did when we were junior high school students, in that we were all fans of martial arts movies. I was a huge fan of Bruce Lee so of course I wanted to duplicate the amazing abilities I saw on the big movie screen.

Like many Japanese Karateka, most NJ are actually introduced to a Karate dojo by friends or family who are Karateka. Also most community centers have beginner Karate programs as well. In my hometown of Vancouver, Canada every community center has a Karate program being taught normally by NJ instructors who have a long history in the Karate community.

Probably common with many Japanese, most NJ typically stay in Karate because they like the hard workouts, they enjoy the challenges of learning new Karate knowledge to attain new rank levels that require some personal sacrifice to achieve and they see a journey in front of them for years to come. But friendships are most likely the most important reason. At first my friends got me into Karate, but after a few years, they all dropped out and only I continued. But the new friends that I made in the dojo then gave me the motivation to continue.

One big difference though is overseas there are almost no high school Karate clubs and there are no school or university level Karate leagues. NJ join a private style-specific club to which they belong to as long as they live nearby it. Official all-style regional or national teams are chosen normally from successive all-style tournaments from city to region to country level. In some countries, participating in regional or national Karate tournaments can also earn a student credits for graduation from high school.

Like young Japanese, competing in Karate tournaments is appealing to NJ, as a personal challenge, as a sense of purpose, as an activity to be enjoyed with dojo friends and as simply a way to try to be the best possible. Becoming an official regional or national team member is something NJ are very proud of achieving, no different from Japanese. Some countries give rewards of money, cars and even houses to their national team members who win medals in important international competitions.

As with Japan, NJ stay in a dojo for the camaraderie between members that is created. While there are often rules about members not dating in the dojo, I have known several people who originally met in the same dojo and later got married. A married Karate couple can have a far better understanding about the value of spending precious family time at karate practice.

For sure, there is an awakening that Karate offers all Karateka which perhaps team sports do not. Many famous NJ Karate athletes and coaches have said they had a childhood disability like dyslexia or attention deficit disorder (ADD) and sport's team that were only focused on winning didn't help them get better. But once joining a Karate club, many NJ found the emphasis on personal development helped them overcome or cope with their disabilities. Personally I have always enjoyed team sports, but I had another big reason to stay in Karate.

Unlike most Japanese, the one major difference NJ learn karate is for self-defense. My mother originally entered me into Judo as an elementary student strictly to learn how to defend myself, which she would tell me frequently. When we moved to a new city, I switched to a Kung Fu club because I was a Bruce Lee fan and as long as I was in a martial art, mom was happy. But then when I became a junior high school student, I switched again to Karate because my new junior high school friends were doing it and they were much tougher than my Kung Fu friends. They could do multiple push-ups on their knuckles and even on the backs of their hands. When we sparred at school in gym class, their punches had a really focused power. When my new best friend defended himself against some school bullies, I knew I wanted to be as strong as him. He exuded so much confidence that I thought he could defend himself against anyone.

Once I belonged to a dojo that during the day was in a nice shopping neighborhood, but at night there would only be strange people walking around on the streets. Therefore, my friends and I needed to know Karate simply to be able to protect ourselves just to get to and from the dojo's night time classes. Had we not belonged to that dojo, we might not have needed to know how to defend ourselves. Although we never did get in a fight, some of us joked it was all part of our Karate training.

In many karate dojos around the world, ending a Karate lesson with ten to twenty minutes of grappling escapes, elbow and knee strikes to target pads, or even knife defense drills, is common. If self-defense drills are not offered, sometimes new students will think they are not learning enough.

So here are larger differences between overseas and Japan that are both valid. A narrow and sharp perspective is perhaps how many Japanese are taught Karate, whereas NJ have a broad and wide perspective to it. Polish your basics is heard everyday in a Japanese dojo, but a NJ might be thinking 'what if I’m attacked by a baseball bat, what do I need to know?' This is why when NJ with Karate experience come to Japan, they all want to learn lots of kata bunkai, the practical applications to the kata techniques.

Overseas, it might be a problem that some Karate dojos oversell the virtues of Karate. It is probably more true that the knowledge of how to evade a swinging baseball bat exists in all traditional Karate styles, but beginners don't realize this fact until they have spent many years learning from a competent Karate instructor.

To the NJ who doesn’t practice Karate, they have an image that Karate is an intensely personal, individual endeavor, so parents will normally put their children in team sports, like soccer or basketball with the reason to develop teamwork skills. Probably swimming, team sports and martial arts are the most popular physical activities for youngsters to do recently.

Most non-Asian countries have no juku, cram schools, and high school studies are not that heavy, therefore there is more time to participate in a variety of activities. Some NJ feel being too heavily involved in one sport makes a person less well-rounded. But some other people also believe that doing too many activities can lead a young person to becoming a 'Renaissance Kid', where they know a lot about many things, but they can not excel to a high level at anything.

So the next time you see a NJ in your dojo in Japan, take a moment to think about why they might have started Karate. Their reasons are probably similar to your own, which means you have more in common with them than you realize.

After 25 years of learning Karate and other martial arts, I've decided my personal Karate motto would be 'focus, fitness and fun'. Focus relates to maintaining a simple Budo-philosophical lifestyle while properly learning from my Karate instructors. Fitness relates to being healthy in mind, body and spirit. And fun means Karate practice must always be worthwhile. For sure once a day Karate has to put a smile on my face, plus on my student's faces too.