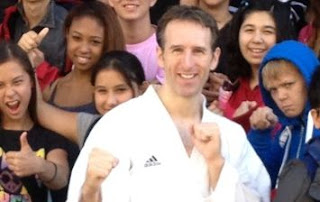 "There is no normal day on this journey."


Everyday is about learning and then trying to practice what I learn.


First, I'm a father, as my two children are everything.
And I'm lucky in my career as a professional karate instructor, a karate pro, because I get to teach what I love to do, just like a golf pro or tennis pro.
From Canada to Japan and back again, the main theme for four decades has been martial arts, media creation, event management and continuous education.
While karate has both traditional and sport aspects, it's truly about resilience, fitness and most importantly meeting amazing people from all walks of life.
Since 2014 in Victoria, Canada, I've been the chief instructor of Kenzen Karate where we teach karate in recreational programs for different ages all the way through to coaching elite high-performance athletes with national team aspirations.
Backstory...

Karate Clubs
I've built 4 dynamic karate clubs over the past 30 years in both Canada and Japan, the latest being Kenzen Karate in Victoria, BC Canada.

Book
The old Japanese style masters are famous, but who outside of Japan actually knows what is happening in today's Japanese karate?
Sonny Leads; a Japanese karate adventure is my fictional 3 volume story of what it is really like to try to succeed training karate in today's 21st century fast-paced and karate-mecca of Tokyo.
The volume 1 manga was originally illustrated by Genshi Kamobayashi and published by Manga University.

Podcast Karate360
Who doesn't love a great talk about the amazing complexities and stories of karate, especially for instructors! Karate360 takes a global view to everything about karate. Season 1 & 2 was over 100 episode with the fantastic co-host Kalan Anglos (combat sports strength and conditioning coach plus Kenzen sensei). Season 3 is coming soon in 2022!
Events
It's great to offer the karate community various levels of events for athletes, instructors, officials and organizers as a challenge to help them improve and through this challenge to enjoy karate to the fullest.
The early years
From the 1980s until 1995, my journey started in several martial arts, finally focusing on karate. During several long stretches in to Japan to learn karate's deeper roots and discover who I was as an adult, I decided teaching karate to others was my passion.

In Vancouver from the 1995-2004 while I was an amateur karate, I became a karate pro as the chief instructor of Kenzen Karate Vancouver.
To broaden my skill sets, I jumped at many experiences including becoming a BC Team athlete, a BC Team coach, a Canadian Sports Institute high-performance coaching student and a Vancouver Film School writer/director/producer student.
See a super short documentary I shot of karate at the 1999 Pan-Am Games.
Day jobs were many, normally around being a brand name company marketing & sales rep (MacMillan Bloedel, Loewen Windows, Rogers Media, Labatt Brewing and Real World Media).
But when I started to teach PE Karate in 25 schools annually during this time, being a karate pro stuck.
By 2004, I really wanted to deepen my understanding of both karate and being a professional instructor, hence the move back to Tokyo.

In Tokyo from 2004-2014, I connected with both my best friend in Japan, Takamasa Arakawa Sensei, who runs the amazing Shiramizu Karate Club in Saitama Prefecture, as well as reaching out to my direct instructor Toshiaki Maeda Sensei, former world champion and Japan national team head coach.
Soon I was the head coach of Seiritsu Gakuen's private junior & senior high school's famous karate club, coaching 6 times a week and attending hundreds of karate events over 10 years.
To better understand the local to global karate journey, I completed a masters in global studies at Sophia University Graduate School. I also completed my course work & residency as a phd candidate in peace & conflict studies at Tokyo University of Foreign Studies to better understand how sports helps to improve human rights.
Beyond the blog, I began to communicate more broadly as a one year guest bilingual columnist for the famous JKF Karate Magazine with "Richard Sensei's Corner", and then to write my first fictional novel, "Sonny Leads, an adventure Japanese karate story", of which volume 1 was published as a manga by Manga University.

Each moment was a new opportunity to learn karate further, to learn how to be a better teacher and to learn that meeting new people brings the greatest experiences for growth and discover.

Again, there is no normal day on this journey.