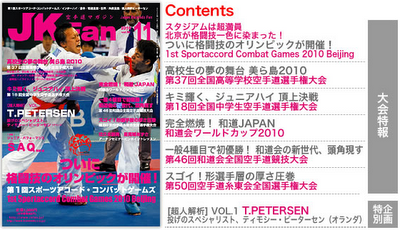 JKFan karate magazine 2010 #11
This month's 'Richard Sensei's Corner' column in JKFan Karate Magazine explains the Shiramizu Karate Dojo Japan Internship for non-Japanese. This unique program was started by Shiramizu's Arakawa Sensei and myself in 2005. Since my main topic is only printed in Japanese in the magazine, the English version may be read here on my blog -just scroll down!
My bilingual interview this month is with the 8th & current intern, Pete Williams, from England.
今月のJKFan空手マガジンのリチャード先生'sコーナーのコラムは、外国人インターンプログラム「白水の研修生」についてです。このユニークなプログラムは2005年に白水修養会の荒川先生と僕が一緒に始めたものです。メインの話は日本語でのみ印刷されるので、英語版はこの僕のブログで読んでください。

When I first came to Japan to learn karate, I had a hard time finding a dojo, then trying to find work that wasn’t during karate practice times. Now that was before the internet, but still today, how to balance the matrix of karate, work and life can be daunting for a non-Japanese (NJ) new arrival with limited language skills. Eventually I figured it out, but I always thought I should help other NJ when they come to Japan.

Finally in 2004, Takamasa Arakawa Sensei of Shiramizu Karate and I came up with an internship idea for a NJ to take karate classes and teach English for one year.

To get the ball rolling, I started teaching English classes to dojo members of all ages after coaching karate club practices at Seiritsu Gakuen High School. After several months, the first intern finally arrived in August 2005, Mark Taylor from my Kenzen Karate dojo in Canada. Mark took the internship one step further by sourcing part-time English conversation jobs while Arakawa Sensei introduced him to a job at Sugito Kindergarten (杉戸白百合幼稚園) to play with the students in English in the morning.

As Mark experienced a heavy weekly schedule of karate, English teaching, tournaments and seminars while trying to stay positive and see some of Japan, I worried about finding of the next right person. The internship would only as good as the intern in it.

After a lengthy search, we selected Paul Atkins, also from Canada. He arrived 2 weeks earlier allowing for a 2 week cross-over with Mark so Paul could learn the 'internship ropes'.

Big Paul was also a Shotokan guy, hence he juggled the Shiramizu practices with a shotokan dojo's practices too. And, he fell in love, taking his sweetheart home with him. (Richard is a good name for any boys that may come along, Paul…)

Next up was Lawrence, again from Canada. He stayed in Japan for a second year while the next interns were here, and he placed 2nd in men's kata at the JKF Wadokai World Championships in 2008. That's a pretty good result after training at Shiramizu!

That year we received the couple Carl Jorgeson and Amy Coulson from England. They expanded the internship to 2 interns. Plus the English class students got to experience 'English English' as Carl put it!

By June 2009, we took another two interns, Erika Ip from Canada and Louise Fisk from New Zealand. It's amazing to think that by the time the girls had completed their year, the internship was 5 years old! Then in June this year Pete Williams from England arrived as intern #8!

We still have things to improve. Each intern has been hit or miss with their learning of Japanese. And we will be starting the internship from April from now on to coincide with the Japanese school and competition calendar.

My hope for each intern is that they not only discover Japan and good karate, but that they have a journey of a lifetime, truly filled with self-discovery as they realize they are capable of much more than they ever thought possible. And they make some lifelong friends along the way too!

Posted by Richard Mosdell at 16:56