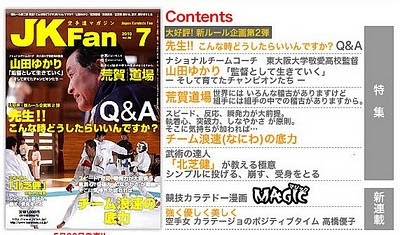 This month's 'Richard Sensei's Corner' column in JKFan Karate Magazine is about women in karate overseas. Since my main topic is only printed in Japanese in the magazine, the English version may be read here on my blog -just scroll down!

It might seen strange at first for a man to write about women’s Karate overseas, but I think everyone should be aware of the challenges women face in their karate careers. For example, women overseas have faced many initial barriers simply by trying to enter a dojo.

During the 1960s when Karate dojo started to thrive worldwide, some had a sign on the entrance door that said ‘no tobacco, no alcohol, no women.’ Some instructors thought such things would distract men from focusing on their Karate training. Many people also felt that Karate was too masculine for women and that it would somehow make them less feminine and family members might have discouraged them from starting Karate.

However, some determined women would not be deterred, seeing that learning Karate offers many benefits ranging from self-defense, fitness, or an interest in Asian arts to the chance to try a unique sport. Yet, women’s divisions in sport karate did not exist until the 1970s when competitions offered only kata. Until then, the only option was to compete with men, which some women did.

The martial arts boom of the1980s fueled by martial arts movies worldwide, stimulated new dojo to accept all kinds of members, including women, as well as children who had never been considered as potential Karate practitioners.

By the early 1990s, women-only dojo started to thrive. For some, a women-only dojo provides a more welcoming atmosphere for those starting Karate, and others who might have endured various types of abuse might consider a women’s-only dojo a safe haven where they could develop not only Karate skills, but also become self-empowered.

The World Karate Federation (WKF) has a Women’s Sport Commission, which is chaired by the first female WKF official, Norma Foster. The aims of the Commission are to increase the number of qualified female WKF officials from the current level of 5 – 7%, to educate national federations to position women in positions of leadership on their boards of directors, to help establish Women’s Sport Commissions in WKF continental Karate federations and to identify appropriate individuals to serve on them.

Only a handful of the 180 WKF national federations have female presidents. This disparity between female Karate leadership and total WKF membership is quite large, since according to Foster, about 75% of the WKF worldwide membership is under 16 and split about 40/60 between boys and girls. Notably, WKF competition is virtually equitable, that is about 50% of the athletes and coaches are female.

The situation for women overseas is constantly improving as all tournaments offer a similar number of competitive divisions for males and females, more women are becoming instructors, more women are beginning to take on leadership roles at the dojo, regional, national and international levels beyond simply being instructors. Furthermore, most dojo actively encourage female membership.

Foster pointed out that Master Funakoshi Gichin wrote that Karate would benefit weak people, such as women and children. Yet men dominated Karate for much of the 20th Century. However, since children, many of whom are girls, comprise the largest portion of the WKF membership, perhaps Karate has returned to the Master’s original concept.

(Special thanks to Norma Foster, Chair of the WKF Women’s Sport Commission)