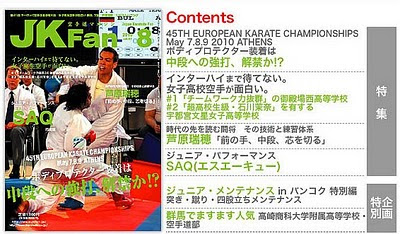 JKFan karate magazine 2010 #8
This month's 'Richard Sensei's Corner' column in JKFan Karate Magazine questions the differences between Japanese athletes and Non-Japanese athletes. Since my main topic is only printed in Japanese in the magazine, the English version may be read here on my blog -just scroll down!
My bilingual interview this month is with 12x US National Kumite Champion John Fonseca.
今月のJKFan空手マガジンのリチャード先生'sコーナーのコラムは、日本人選手VS外国人選手についてです。メインの話は日本語でのみ印刷されるので、英語版はこの僕のブログで読んでください

But there are some differences that are easy to see. For example, Japanese kumite athletes may be more deliberate with their moments compared to the fluid springing step of NJ athletes. Some say the NJ nonlinear bouncy footwork was initially created twenty years ago to evade the solid, linear attack of Japanese athletes. This type of movement seems to have become the norm with elite athletes competing between all nationalities, not just against Japanese. In recent years various Japanese athletes have even adopted some aspects of this lateral movement with some success, which would mean a method of movement originally meant to defeat Japanese athletes is now being incorporated by some of them.

Like other sports, sometimes the high-performance development an elite athlete requires cannot be done in their original club so they have to move away to join a better training facility with an elite coach. While Japanese athletes may try to enter a university with a strong karate club known for producing national team members, most university clubs overseas are not oriented for competition. Therefore elite NJ athletes will sometimes move to another city, perhaps hundreds of kilometers away, to belong to a private karate club with a strong competitive record. This might mean that athletes take on meager jobs, enter university late, or complete university studies part-time over a 5 to 7 year period to allow time for high performance training.

Whereas in Japan a strong competitive record will get an athlete invited to national team selection try-outs, most national team selections overseas are decided by those winning first and second in their division at nationals to qualify to enter a pool of national athletes. Most countries have a combined junior and senior national championships for ages 13 up. But even if an athlete qualifies for their national team, sometimes they cannot pay their own way to international tournaments, meaning a second-tier athlete will attend instead.

Once at an international event, most karate athletes enter the final stage of their periodization plan. NJ karate athletes may have a tapering plan to reduce practices as well as shorten the length of practices within the few days prior to competition. In comparison, Japanese athletes seem to prepare like baseball batters because they practice much more just before an event, as like batters they may believe they must practice their timing constantly right up until the start of the game to maintain their rhythm.

One commonality is for sure, everyone returning to their country with a gold medal will celebrate their success in their own way; some with a large party filled with song and dance, some giving speeches while wearing suits to supporters, and some by doing nothing more than simply trying just a little bit harder to repeat their performance the next year.

Posted by Richard Mosdell at 23:08