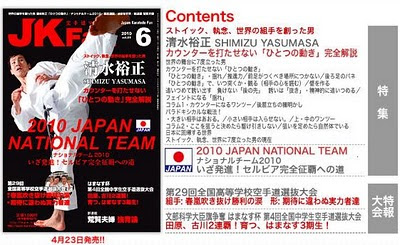 JKFan karate magazine 2010 #6
This months Richard Sensei's Corner column in JKFan Karate Magazine is about the 22nd Annual International Budo Cultural Seminar. Since my main topic is only printed in Japanese in the magazine, the English version may be read here on my blog -just scroll down!
My bilingual interview this month is with various non-Japanese who attend the camp.
第6回目の今月のリチャード先生'sコーナーは、第22回国際武道文化セミナーについてです。メインの話は日本語でのみ印刷されるので、英語版はこの僕のブログで読んでください 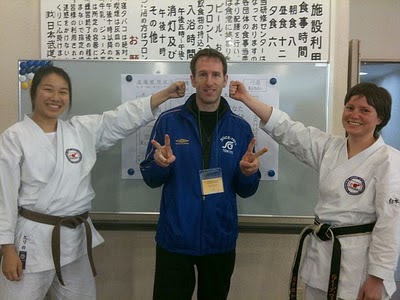 Getting encouragement from someone else who is also serious about their studies in budo is very important for Japanese and non-Japanese alike. The International Budo Cultural Seminar put on annually for 4 days each March by the Nippon Budokan at its training center in Katsura City, Chiba Prefecture is significant for many reasons, the most for me being is that it allows NJ budoka to connect with others who are also committed to learning their budo art.

The another valuable of the seminar is for allowing NJ to interact closely with senior Japanese budo instructor's from the 9 main budo arts promoted by the Budokan; Karate, Judo, Kendo, Kyudo, Aikido, Jukendo, Sumo, Shorinji Kempo and Naginata. The seminar consists of training sessions in one's own budo art, trying several other budo arts, hearing lectures from university professors who specialize in budo studies, discussing budo topics, and of course, socializing with other participants.

As a clear example of the endearing value of the seminar, many of the participants had previously attended not just once, but 5 or 7 times, with a few having been there since the very first one was held! And comparably, many of the instructors have been the same every year. This has allowed people to reconnect with friends, both sensei and students, and this seminar has become an annual event participants look forward to.

The chance also to discuss budo was intriguing to me. The black joke of 'bullshido' was mentioned, that the teaching of budo has become overly commercialized by non-traditional budo groups in some countries. And while this may be unfortunately true, the essence of this seminar was simply a hands-on experience of proper budo. While the similarities between each art include a common etiquette, a seriousness of intent, even some similar technical movement, the main commonality is that truly studying budo is more about personal discovery and improvement instead of simply learning how to defeat on opponent.

Historian Kaku Kozo spoke this year about a study he did of 150 Japanese kenjutsu arts to learn their main 'secret technique', normally only taught from one head master to the next, as part of a Kendo Nihon magazine series. The thing most revealing he found was that the secret technique of each budo art was not something incredibly complicated or advanced, but normally simply part of the fundamental basics of each art’s teachings. Hmm I thought, maybe this is why ‘Practice more kihon!’ is heard in all Karate dojos!

While there was normally translation into English for the sessions and lectures, of the participants I talked to perhaps forty percent were fluent in Japanese and maybe over ninety percent could carry a conversation. This bodes well for the teachings of budo being understood clearly by NJ participants.

Overall, the Budo Cultural Seminar weekend is a great experience that all serious NJ budoka should try sometime. And the price is incredible, at under ¥6000 for all the sessions, accommodation and meals. Actually, I think this seminar is perfect for Japanese who want to meet NJ interested in budo while also improving their English in a budo setting. They just need to arrive with a good sense of humor and the ability to stay up late!