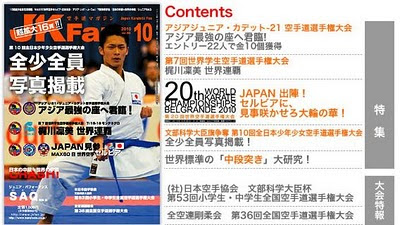 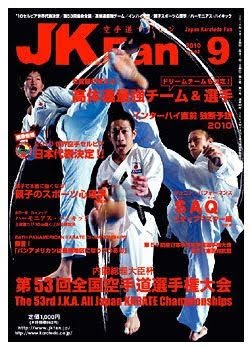 JKFan Karate Magazine 2010 #9.
This month's 'Richard Sensei's Corner' column in JKFan Karate Magazine is part two of my experiences as a non-Japanese coach in the Japanese high school karate system. Since my main topic is only printed in Japanese in the magazine, the English version may be read here on my blog -just scroll down!
My bilingual interview last month was with European Champion Kalvis Kalnins, and this month's interview is with the first female WKF referee, Norma Foster.
先月と今月のJKFan空手マガジンのリチャード先生'sコーナーのコラムは、外国人コーチから見た日本の高校空手です。メインの話は日本語でのみ印刷されるので、英語版はこの僕のブログで読んでください

Huge colorful cloth banners drape from the spectator seating balcony that wraps around the arena, each banner blazingly declaring every club’s motto like ‘Never Give Up!’ or ‘Eat the bark off a tree to survive!’ Hundreds of karate uniformed high school student’s march in military lines, swinging their arms high, as local high school girls in their skirted uniforms lead each team while holding a placard announcing the club name. The teams file by the VIP stage at the front where the many karate association’s presidents stand at attention. For a non-Japanese, it is all an impressive display of the color and pageantry at the opening ceremony of the All-Japan Karate High School National Championships!

But to get to Nationals, I had to adjust to the Japanese high school karate club culture first. When I started as a karate coach at Seiritsu Gakuen, I remember one of the first times I went to clean the dojo, a first year student grabbed the mop out of my hand, bowed, then mopped the floor. Hmm. Then I tried to clean the mirrors, when another student grabbed the cloth, bowed and then wiped the mirrors. This is how I learned that the first years do all the chores. Interesting, maybe they’ll wash my car too…

On the biggest differences for me coaching in Japan compared to Canada was how my training menu had to adjust to the needs to the club. I’m used to 2 to 3 hours of daily competitive, strategic training (footwork, tactical theory depending on point score, adjusting attack plans when facing stronger, even or weaker opponents) and maybe only 2 times a week of training. the basics. But here the students really wanted an hour or more of just basics everyday to feel they’re ready before competitive training. Yet that’s ok as it has become possible to balance both training menus since the students come to the dojo 6 days a week, compared to 3 to 4 times overseas. It’s similar to a professional modern ballet company that still has classical lessons in the morning for the dancers to keep developing their skills prior to their practice of avante garde productions in the afternoon.

One thing a karate club in Japan is really good at is building intensity. The stereotypical view that Japanese are ‘quiet and reserved’ gets throughout the window when a non-Japanese sees a high school karate club practice! At anytime during standing basics, moving basics or kumite practice, everyone kiai, people in lines waiting kiai to get the energy up, everyone is constantly yelling encouragement and advice, so it gets pretty noisy. This is great and makes me feel 20 years younger right away too!

Even more intensive than that is summer camp. These two words seem to have a heavy weight that when spoken aloud which make Japanese people become quiet and reflective. It is the hardest, toughest time of the year, compared to some overseas camps which can be a mixture of karate training and vacation play time. Here, everyone eats together, trains together, sleeps together and baths together. There’s before breakfast practice, morning practice and afternoon practice, plus night time lectures and note taking. For 4 days or more. The first time I went my thoughts of playing beach volleyball every afternoon disappeared really fast!

Whereas overseas we normally do pushups if the students make a glaring mistake in practice, I was surprised to see at summer camp a common training punishment is 100 squats, meaning over 1000 squats can be done a day, with students actually crawling out of the dojo with leg cramps at the end of a session. Rough. But this is great at the same time because such an exercise builds the spirit as well as the body.

What I find charming at summer camp is when after new captain is elected, the third years who have just retired each give a speech to their kohai (juniors) asking them to keep up their practices, to fight the ‘good fight’ (don’t give up at anything they do, means the good fight), build the reputation of the school and honor them with strong competitive results. Wonderful. It’s hard for me not to shed a few tears then too.

Winter before Nationals of course brings the cold Siberian winds over Japan. In Canada in winter we need to turn on the heat as it can get a low as -35 degrees in some cities. But even though it doesn’t go below zero in Tokyo, I was surprised to see how so many dojo don’t use heaters in the winter at all, as students wear their club track suits under their doji to stay warm for the first part of the training. This reminds me of the saying in the West we heat the house, but in Japan we heat the body.

The atmosphere at Nationals is very serious. Everyone from athletes to coaches to officials to volunteers to spectators all clutch programs and seem like they each have an important job to do which is integral to the championship. Like overseas, an athlete and a club’s reputation can be cemented at Nationals. I was surprised to see such a high level of ability from the students. So when I’m standing with my athletes in the middle of the arena beside the mat as they compete, I always think there is no other place I want to be, but right here. Actually being in the dojo everyday is the most enjoyable thing for me, but when it leads to the Nationals, like in any country, it is something truly to look forward to.

The one suggestion I would have for any high school karate club is try to take their club to an international event every 3 years so that all the students can experience karate with non-Japanese once while they are a high school student. An ideal event to attend would perhaps be the International Hawaiian Open Championships in November because many nationalities gather there and the competitors tend to be of high caliber, so new ideas, strategies and tactics can be learned first hand. Plus there may be a way to arrange a training camp after the tournament with other interested teams.

The question I sometimes get from non-Japanese international students is if high school karate clubs will accept them. The answer is yes. International students training with in their school’s karate club is a great way for NJ to learn Japanese, make friends, and have a far deeper experience in Japan. In addition, it is beneficial for the Japanese students as well by making international friends through whom they can build an international view point. Truly through karate the world can become closer.

With our school having started a junior high karate club from this year, I’m looking forward to further mixing the best of all karate worlds into the club’s culture so that the students can have a positive and healthy karate experience, and we can together represent the school at many more national events!