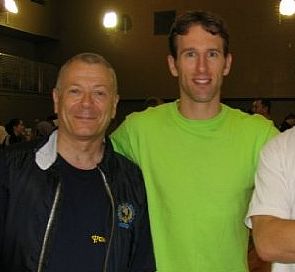 Leslie & I in 2008 at the Wadokai Worlds in Vancouver.
Our last time together at the same place at the same time
(thanks for the photo, Peter S.!)


It's far too hard to type out letters to form words to acknowledge my dearest friend Leslie passed away on February 15th. To say Leslie meant the world to me doesn't even come close to how his incredible personality affected not just me, but so many others.

I knew Leslie a long time, since I was 13 when he was initially a karate dojo mate. He was around 40 and one of his elementary aged kids also did karate. We lived close so I often bummed rides off him to spare myself the long, over-lit bus ride home, and during those rides he simply asked me questions, listened kindly, and never tried to lead the conversation to fill time. Hence our friendship started.

He said when he was younger he had been quite opinionated - 'hahaha' he then would laugh whenever stating a fact - but he had taken some sort of course that allowed him to transform his thinking to be more positive. Hmmm, my slow brain thought. An education had started for me.

After he met Cathy, and her children took up my karate classes, I became even closer to both of them. Cathy and I also used to have long talks while watching Cathy's young daughter do cartwheels all over the gym floor after practices. That followed with our many dinners, stay-overs at their place and mine in Vancouver eventually, and many trips to karate events of all kinds. Somehow I merged into their family life and like everyone else who did, was richer for it.

What impressed me so much about Leslie is that he possessed a tranquil and curious outlook to life, which was fueled by an immense intelligence that saw far and wide. He shared this with so many of us younger listeners, as he taught us to approach all of life's obstacles as if they were puzzles to be figured out, with the more difficult ones being the most rewarding to overcome.

Whether it was running his pain clinic in Victoria, teaching himself HTML or any number of languages, or mastering kobudo, or qualifying as a world karate referee (Cathy too!) or taking up tango, Leslie liked challenges. He liked his brain activated. And he demonstrated finding the joy in his pursuits. It was just one of his many gifts.

I always remind myself to smile and laugh, to enjoy each moment even if it is challenging and then to move on to love all that life has to offer, just as Leslie did.

Once we drove several hours to a karate tournament where he was also going to be taking a referee's test so he thought to pass the time in his car, he gave me a practice sheet of competition rule book questions and answers to quiz him on our way. Of course, the answers to many questions I, the competitor, had not known which lead to lots of chatting and Leslie shedding light on how to think of the conceptual purpose of the rules. Much much later dear reader, which you are already guessing, the ah-ha moment came when I realized Leslie had no need to practice for the test, but really his purpose of this little exercise was to deepen my own understanding of the rules without simply lecturing me. I knew Leslie could be a task master, but with me, everything he did was to lead by example.

Many times now I look at something and think “what would Leslie do?'' It's so easy to hear his voice and remember him offering questions for me to ponder instead of just saying what his approach would be.

Leslie was there for me at the best and not so best times. Once, when some of my martial arts relationships had became oppressive to the point of being cult-like, making me feel I needed a change in my life, he came to Vancouver and just sat with me. The decision I had arrived at to find more positive and healthy experiences elsewhere had his full support, even though he himself was a leader from the same fish bowl I was needing to leave. Actually, he too had come to the same decision already himself for similar reasons, but he encouraged me to take the first healing steps since I was suffering. And our relationship just kept ticking along afterwards, more bright and full of truth then every before.

That was Leslie. Bighearted and determined. Another time when I led some of my Kenzen Karate Vancouver club members around Japan, we were all getting on a train at Kusatsu station in Shiga to go to see the temples in Kyoto when just as the doors were closing, Leslie leapt off his seat and flew through the air in a sprinter's dash, just squeezing past the closing train doors, to land on his late-50s knees on the outside platform. But, his hand stretched far enough to grab something small on a platform bench. Something one of us had left behind when getting on. My wife's wallet (really, my fault probably since she was busy directing everyone so expertly). Leslie was amazing. I actually hadn't figured out why he had darted off the train until much later, but I was so worried/frustrated at the time, I ran the entire length of Kyoto station in the oppressive summer heat trying to find him on the next incoming train. When we finally did meet up, he never drew overt attention to his heroic feat. And our relationship just kept ticking along.

Before I moved back to Japan years ago, Leslie and Cathy flew me out to their Kenzen Lethbridge club to 'teach some seminars'. Generous with their time and money, I think they really just wanted to see me before I disappeared into the abyss of Japan and of course I wanted to see them. Whether drinking wine while over looking the city or just talking at the kitchen table, it was a tender trip for me. When Cathy told me Leslie wanted to semi-retire, it didn't compute. Leslie, retire? I'd retire before Leslie, right?

I'd missed Leslie and Cathy on my last two trips to Victoria as they were away dancing up a storm somewhere. Always to reply to my emails promptly though, Leslie of course gave me dates when they would be around. I kicked myself for not just calling at those times.

Once when he visited Japan he came to see where I work and coach, really taking lots of time from his schedule. And then I sent him on the absolute wrong train back to Tokyo! Agh! But he never said a word about it. He probably loved the trip to see new scenery.

And, now it comes to Facebook. I've read how people had first learned of loved ones passing away on FB, which I thought was horrible. When Akino Sensei (see another post soon) passed away at the end of January, I started deeply thinking how I must be better at being the initiator in calling good friends and absent family, and perhaps embrace the social meaning of social media since it's really how we keep in contact with others, isn't it. But then I saw something I couldn't believe. The messages of condolences about Leslie in the FB news feed. It'd didn't compute. Dammit, I had left my unmade call too long. It's ridiculous to say I'm sorry here. Leslie would know what I mean.

My dear friend had suffered, but he lived an exceptional life and now he's at peace. This finality just wasn't real for me until I heard Cathy's calm, measured voice explain it all on the phone.

So many of our memories, now I must hold on to so very tightly. Tears, I can't hold you back any longer...

He was a big brother, a father, and a dojo mate, but most of all, Leslie was a generous friend who accepted me for who I am and he honestly wanted to hear what I had to say. He was smart and he could be wickedly funny. 'He was Leslie.' If you knew him, and if you did lucky for you, I think you can agree with that description.

“Of course you are staying with us, right!' is the only reply I would get from Leslie (or Cathy) if I ever mentioned I was visiting Victoria.

...Yes Leslie, I'll always be staying with you.

(And thank you for saying this tribute is ok, Cathy! I'm with you always!) 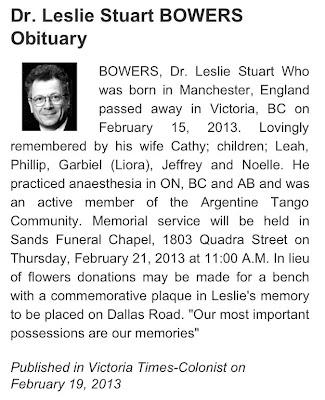 Posted by Richard Mosdell at 06:56

From an appreciative reader, thank you for sharing. I suspect this post resonates for many.

Thanks Narda, I appreciate your kind words.